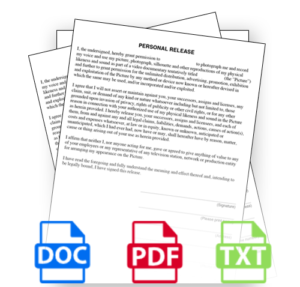 Additionally, documentary film release forms establish how you as the filmmaker can use your footage, and also whether or not the subject is getting compensated for their appearance in your film.

Who needs to sign a documentary film consent form? 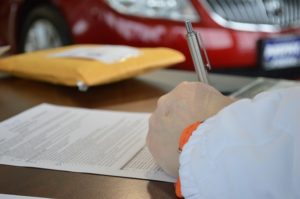 Different film distributors and broadcasters have different release form or documentary waiver requirements. Generally speaking, you will want to get a release form from anyone who speaks on camera and is recognizable in your film– with the possible exception of public officials speaking at events for instance, or in some cases people on the public streets who have no expectation of privacy (such as protestors at a rally or demonstration).

Overall for most documentary film purposes, you’ll need to get your main documentary film subjects to sign a release form as well as the other people who appear in and speak in your footage, as long as they aren’t in public.

What are the different types of documentary forms?

Documentary forms come in several different flavors. Below we’ll explain each form and what it’s purpose is. Not all films will need all forms.

Some filmmakers feel awkward or get nervous about asking their subjects to sign release forms, especially if they suspect their film subjects will be nervous about signing anything with “legalese.” Here are some tips to help make getting your documentary film release forms signed less awkward:

In general, it’s important for documentary filmmakers to keep in mind that regular people understand that they may have to sign a waiver or filming release form. This is not strange, it is not out of the ordinary, and for many people it will be expected. Tell your subjects that you will have a standard release form for them to sign ahead of time and you will almost never run into problems.

In situations where you are getting vox pops or “man on the street” interviews, some filmmakers rely on the fact that the individuals being filmed are in a public place and thus, legally, have no expectation of privacy (depending on local laws this may differ). However ideally we recommend at the very least you get the person you’re talking to to say and spell their full legal name (and email address or phone number if they have one) and agree that they know they’re being filmed. You won’t use this footage of course, but you’ll have it in the can which might help you get cheaper E&O insurance for broadcast. E&O is short for Errors & Omissions insurance that some broadcasters may require you to have before accepting your film for television broadcast.

Some documentary films may need special language added to their release forms depending on their subject matter (and some broadcasters or film distributors may have their own in-house forms that they want you to use). We’re not responsible for any legal issues arising out of the use of the sample release forms that we provide as a reference. Although forms like these have been used in tons of documentaries without problems, you should always consult with an entertainment lawyer before putting these documents to use.